Rabbi Moshe Library in Bulawayo: a collective effort of many 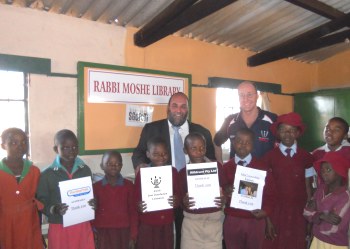 educational and recreational facility. Perhaps even more importantly, however, it demonstrated that there are people, not just across the border but across the ocean as well and of different races and creeds, who still care about them.

The opening of the Rabbi Moshe Library at Bulawayo’s Vulindledla Youth Centre took place on 25 July, in the presence of Bulawayo Mayor Councillor T. P. Moyo and various other dignitaries. Named after Rabbi Moshe Silberhaft, Spiritual Leader and CEO of the African Jewish Congress (AJC), it brought to fruition a trans-continental partnership involving the AJC, Australian Books for Children in Africa (ABCA) and the Support Group of Families of Terminally Ill (SGOFOTI). The latter was founded and is co-headed by Ruth Bolnick-Feigenbaum, a prominent member of the local Jewish community of many years standing.

The origins of the project go back several years ago, when Sheryl Furman, formerly of Marquard in the Free State and today living in Melbourne, sent Rabbi Silberhaft several hundred books on behalf of ABCA for distribution in Zimbabwe. After discussing the matter with Feigenbaum, it was decided to give half to SGOFOTI and give remainder to various primary schools in Bulawayo. An approach was then made to ABCA donate a larger consignment of books to SGOFOTI with the aim of establishing a library for primary school learners.

In Australia, David Grieves duly undertook to provide this on behalf of ABCA. As part of his fundraising effort, he sold bookmarks made out of original Zimbabwean currency notes from the hyper-inflation years, when a billion Zimbabwe dollars barely paid for a week’s groceries. The American Jewish Joint Distribution Committee also chipped in by contributing towards the transport of the books, over 3,000 of which were ultimately sent, and shelving for the library.

Grieves, Rabbi Silberhaft and AJC executive member Ann Harris travelled to Bulawayo to take part in the opening function. The latter commenced with prayers from representatives of the Jewish, Christian and Muslim communities, respected delivered by Hylton Solomon, President of the Bulawayo Hebrew Congregation, Father Day and Sheikh Ishmail Jassat.