by Mandla Tshuma (courtesy of Steppes in Sync)

In a bid to boost reading culture in Bulawayo, Basement Bookmart (BB), a bookshop nestled between Robert Mugabe Way and George Silundika Street, along 10th Avenue, is dealing in affordable book services.

The services offered at the bookshop include the sale, lending and exchanging of books.

The prices of books, most of which are in good condition, range between five and 49 South African rand (from less than a buck to about $6.00 USD). The categories include fiction, general non-fiction, encyclopedias, children literature, as well as back issues of magazines.

The bookshop, owned by Alison Burton, has an “Exchange” section at which clients pay only 10 rand to exchange two books and 5 rand for one. It’s a familty business, pretty much. Alison’s sister runs an upscale book-cum-coffee shop in Bradfield called (you could never have guessed).. “Book & Bean”.

Readers who cannot afford to buy some of the literature can borrow from the bookshop for only 5 rand a copy.

“It is not that we make a lot of money, but there are some readers that would like to read,” said Mr Mike Sibanda, the bookshop’s acting manager, adding that the proceeds go towards the salaries of the two workers employed at the bookshop.

“We are like a charity organisation. If there are donations wanted, we can do that; we can always help,” further explained Mr Sibanda.

For those wanting to purchase books in bulk, a reasonable discount can be negotiated, Mr Sibanda explained.

He said some of their orders are from South Africa and they also buy books from people who bring them for sale, while some books are donated to them by well-wishers. “Once, an American man, who was leaving the country, came and donated several boxes with a variety of books,” Mr Sibanda said.

BB’s well-read manager said that, although Bulawayo residents, like most people in the country, may face financial constraints, the response to the bookstore’s services has been overwhelming. “People are coming every day and this place is always filled with people, especially women, buying and exchanging books,” he said. 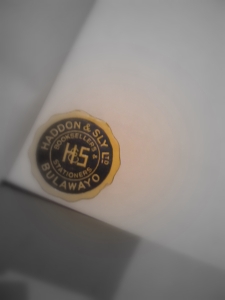 Mr Sibanda  encouraged young people to consider visiting the bookshop, “There are also books about the history of this country and the new generation does not know how things were like before Independence. If they read these books, they can find out how people lived before we gained our independence.”

A bit prior to my visit, BB store made a significant discount to Zimbabwe reads: Mkwabene Secondary School in Insiza District received a voluminous donation of books as a result of this.